For some reason, Michael Rapaport decided to tear apart Ariana Grande’s appearance when she posted a photo with no makeup on.

His exact statements,  “Ariana Grande is 27 acts 12, you take off those boots she hides her legs in, the cat eye make up and the genie pony tale and I think there’s hotter women working the counter at Starbucks no disrespect to Starbucks,”

His Tweet didn’t just piss people off, but had his fans pretty pissed off at him 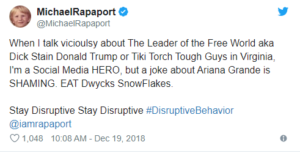 too. His response… it definitely wasn’t an apology.

What’s honestly wrong with people these days. Why say something so negative about another? Seems the famous have the belief that their statements have no consequences… or maybe they’ve just lost their common sense.

Ironically, most of the celebs calling others ugly, aren’t so great on the eyes themselves LOL. Michael Rapaport is definitely not going to be described as, hot, gorgeous, handsome, in his lifetime, whether he wears make up or not!